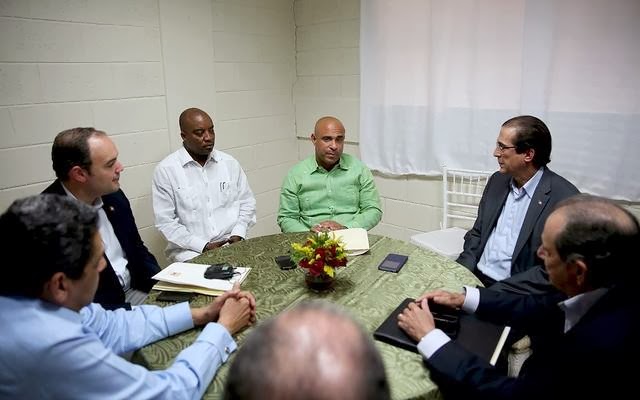 The Governments of Haiti and the Dominican Republic met on January 7 to address Dominican Constitutional Court Sentence 168-13 that retroactively revokes the nationality of more than 700,000 Dominicans of Haitian and Caribbean descent all the way back to 1929 (see: http://lenouvelliste.com/lenouvelliste/article/125999/Declaration-conjointe-entre-les-gouvernements-haitien-et-dominicain.html).  The Dominican Government attempted to skirt the issue of the controversial Sentence altogether and instead put forth a plan that would regularize the situation of undocumented foreign migrants in the DR including Haitians.  They also attempted to resolve some pending economic and migration issues with Haiti.

The Haitian Ministers of Foreign Affairs and Finance held a joint press conference on January 8 announcing that the plan as it does nothing to resolve the situation facing hundreds of thousands of Dominicans of Haitians and Caribbean descent that have been made stateless by this unconstitutional court decision: http://lenouvelliste.com/lenouvelliste/article/126026/Le-plan-de-regularisation-ne-resoudra-pas-le-probleme-des-Dominicains-dorigine-haitienne.html .

More than 97% of the Haitian public distrusted the bilateral commission.  Meanwhile, support in Haiti for CARICOM, the union of 15 Caribbean nations, has never been higher.  More than 98% of Haitians in-country and in the Diaspora favor continuing multilateral pressure.  CARICOM has threatened additional sanctions if nothing is done to address what is widely agreed to be a racist violation of human rights on the part of the Dominican Government.  CARICOM, OAS, UN, IMF, World Bank, IDB, and the EU all had observers at the bilateral meeting along with several countries of the region, including Venezuela.

The court sentence is widely agreed to be racist and a violation of the Universal Declaration of Human Rights and four international human rights conventions. The bilateral meeting was essentially an attempt on behalf of the Dominican Government to put diplomatic window dressing on an issue that is being likened to 21st Century apartheid or the rise of the Nazi state.  Observers are especially concerned that these actions could be the precursor to another ethnic cleansing along the lines of the 1937 massacre of 30,000 black Dominicans and Haitians living in the DR.

This latest failure on behalf of the DR Government to seriously address this issue begs the question about next steps.  In addition to threatened CARICOM sanctions, the OAS has issued a preliminary report through the InterAmerican Commission of Human Rights (IAHCR) that clearly condemns the Dominican Governments actions.  There is no date set yet to discuss the IACHR by OAS Permanent Council.  Two UN agencies, the High Commission of Refugees and UNICEF have taken a similar stand; however, until now neither the Secretary General and the UN Special Envoy for Haiti, former President Clinton, have condemned the Dominican action.  Rather, they have made general statements about how the two countries should talk.  Several Human Rights organizations, including the Kennedy Human Rights Center, and activists, including Nobel Prize winner Mario Vargas Liosa, have publicly condemned the sentence.  The Venezuelan Government has publicly condemned the Sentence, but have yet to take concrete actions.  Venezuela’s position as head of PetroCaribe makes the country an important ally in the region. PetroCaribe sanctions could have catastrophic effects on the Dominican economy. The US State Department has expressed official concern over the decision as well.

As the First Black Republic, the Haitian Government has a long tradition of supporting freedom and liberty throughout the world.  Haitian soldiers fought alongside the Bolivarians to secure freedom in Latin America and alongside the American Revolutionaries, stood against Nazi Germany and provided Haitian passport to the persecuted Jews seeking safe haven. The Haitians were among the first 50 countries to support and form the UN.  As such, the Haitian Government has requested support in their quest to secure the human rights of their citizens around the world.
Posted by Haiti Sondage & Enquetes at 10:55 AM No comments: