Posted by Haiti Sondage & Enquetes at 1:18 PM No comments: 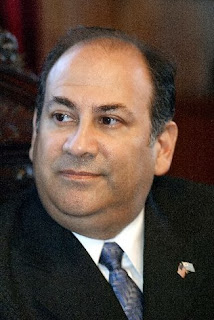 Democracy at Risk for all Dominicans By Roger F. Noriega

The international community has justifiably condemned a decision by the supreme court of the Dominican Republic revoking the citizenship of as many as 350,000 Dominicans of Haitian decent.  Unfortunately, that decision in September was just the latest in a pattern of cynical, partisan actions that threaten the rule of law and economic growth in that nation.  Dominicans of goodwill must act to restore the probity and independence of their institutions to secure a better future for all of its citizens.

Early this month, the respected Inter-American Commission on Human Rights paid an urgent visit to that country to study the implications of the decision to retroactively apply a 2010 constitutional amendment that redefined citizenship rights, effectively stripping multitudes of their “right to nationality.”  The Commission urgently issued a series of unambiguous recommendations insisting that the Dominican state take “simple, clear, fast, and fair” steps to “guarantee the right to nationality of those individuals who already had this right” before the ruling.

The court’s decision has been defended as a measure needed to address legitimate concerns over illegal immigration.  However, even before this draconian court decision was issued, electoral authorities had refused to provide voter identification cards to thousands of persons of Haitian background.  That is a clue that this dubious decision is likely a shameless political maneuver of the ruling Dominican Liberation Party (PLD) to disqualify voters of Haitian descent who tend to vote overwhelmingly for the opposition Dominican Revolutionary Party (PRD).  For example, the late José Francisco Peña Gómez, the proud son of Haitian immigrants, was a pillar of the PRD.

The PLD’s boss, former president Leonel Fernández, has named his partisans to the supreme court and the electoral tribunal—which explains why these important institutions of the state serve his political interests.  For example, the current chief justice, Mariano Germán Mejía, was Fernández’s law partner, and another justice, Marta Olga Garcia, is the sister-in-law of Miguel Vargas, a fellow caudillo with whom Fernández is conspiring to hijack the opposition PRD.

Although the electoral tribunal is supposed to be a panel of impartial magistrates who run all national elections, its members were chosen based on their loyalty to Fernández and/or the ruling PLD.  Fernández has wielded his absolute control of tribunal to rig recent elections to deny the opposition party proportional representation in the congress; for example, although the PRD won nearly 42 percent of the nationwide vote in 2010, it claimed only one of 32 Senate seats.

The former president’s egregious manipulation of state institutions to build a “one-party state,” is chronicled in a report issued in November by the prestigious Washington, DC, think tank, the Center for Strategic and International Studies (CSIS), authored by veteran U.S. Senate advisor Carl Meacham.  Meacham highlights a brazen maneuver by Fernández to make a pact with former PRD candidate Miguel Vargas to usurp control of the PRD, oust the party’s strongest leaders, and undermine party’s ability to muster a viable campaign against the ruling PLD.

“The Superior Electoral Tribunal (TSE) has ensured the continued disunity of the PRD,” Meacham reports.  “Given its discretionary involvement in preserving Miguel Vargas’ PRD presidency—and its decision not to engage in the party’s expulsion of former president Hipólito Mejía—some fear that the TSE is playing an undue and decisive role in crippling the PLD’s primary opposition.” https://csis.org/files/publication/131111_Meacham_DominicanRepublic_Web.pdf

Dysfunctional institutions will trap all Dominicans in corruption and economic decline.  According to Transparency International (TI), the country is ranked 123rd place in the world terms of corruption; only Venezuela, Paraguay, Honduras and Nicaragua have worse ratings in the Americas.  A State Department report this year noted that, “Corruption remains endemic at all levels of Dominican society.  Dominican law enforcement, military, and government officials are often accused of a range of corrupt activities including narcotics trafficking, money laundering, extrajudicial killing and other crimes.” http://www.state.gov/j/inl/rls/nrcrpt/2013/vol1/204049.htm#Dominican_Republic

Not surprisingly, the CSIS report notes that Fernández or his allies have been accused of corruption, money laundering and other serious crimes.  For example, Vargas was accused in sworn testimony earlier this year of accepting $300,000 from reputed drug kingpin Jose David Figueroa Agosto in 2008.
http://www.elnuevoherald.com/2013/01/05/1378123/politico-dominicano-recibio-dinero.html

Haitian Dominicans are not the only citizens paying a price for systematic corruption.  Perhaps the current international scandal generated by the supreme court’s careless ruling will spur the nation’s political class and civil society to agree on an urgent overhaul of its judicial and electoral institutions.  Only then will the Dominican Republic return to being a good neighbor and productive partner for both the region and the United States.

The author was U.S. ambassador to the OAS and assistant secretary of state during the George W. Bush administration.  He is a visiting fellow at the American Enterprise Institute and managing director of Vision Americas LLC, which represents U.S. and foreign clients.
Posted by Haiti Sondage & Enquetes at 1:15 PM No comments: