Putting Aid to Work for the Haitian People: Creating a Haitian Housing Authority by Stanley Lucas 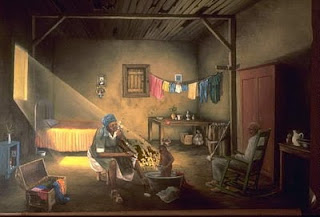 Background
There has been much focus on the failure of foreign aid in Haiti prior to the earthquake and in the earthquake recovery process, see: http://solutionshaiti.blogspot.com/2011/01/haiti-one-year-after-earthquake-by.html People are asking why there is no visible program and what can be done.  There are many reasons aid failed to bring about development in Haiti prior to the earthquake – corruption, failure to build capacity in-country, and a patchwork approach to aid.  In the aftermath of the earthquake, these same dynamics have taken hold.  There are many good programs operating, but in spite of record funding (almost $10 billion in international aid has been pledged) their impact has been limited.  Aid is still being administered through a patchwork of programs not tied to any clearly defined short or long-term goal.  Turning this situation around and demonstrating a commitment to meaningful aid that improves the situation for the Haitian people requires a new approach. The Haitian people have no clear understanding of how the country will move forward nor does the international community for that matter as evidenced by their failure to remit the funds committed to reconstruction.  The reconstruction process is currently being run through a largely opaque operation, the Haiti Interim Reconstruction Commission (HIRC), co-led by former President Bill Clint on and Haitian Prime Minister Jean Max Bellerive.  Haitian members of the HIRC have complained publicly that they have no idea how projects are being chosen or how contracts have been awarded, see: http://solutionshaiti.blogspot.com/2011/01/haiti-interim-reconstruction-commission.html They say their role has been reduced to a “rubberstamp”.  Furthermore, they say that almost all reconstruction contracts have been awarded to foreign firms without bidding, and that Haitians have been largely marginalized.  The current process is not working and needs to be reinvigorated and refocused.
The reconstruction process needs an anchor program that focuses the reconstruction process and supports immediate, mid-term and long-term priorities.  An anchor program would galvanize the Haitian people and international community and reinvigorate the process.  The creation of a Haitian Housing Authority would address the immediate housing needs; would refocus aid money into a program that has tangible benefits for the Haitian people, and would address the mid- and long-term economic development challenges the country faces.
Click on pictures to enlarge 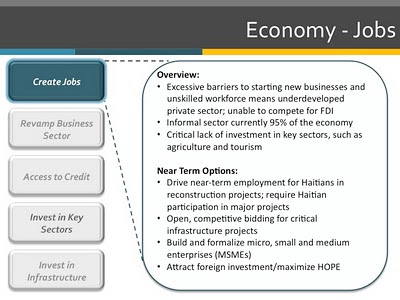 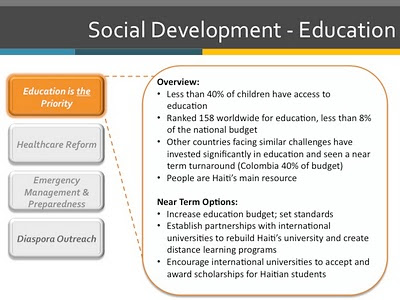 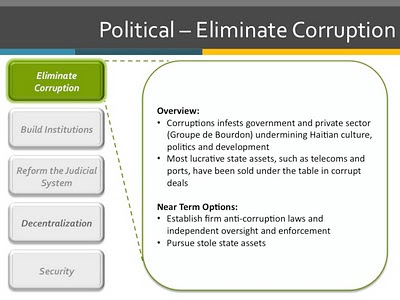 I hasten to add that a resolution to the political crisis surrounding the recent elections must also happen before any of this can happen.
Haiti’s Housing Crisis
Haiti’s top reconstruction priority must be rebuilding people’s homes.  About 1.8 million people are still living on the streets having lost their homes more than a year ago in the January 12, 2010 earthquake.  More than 500,000 homes were reduced to rubble.  Haitians are living in more than 1,370 makeshift “tent cities” that have sprouted up throughout the country.  I would note that the UN estimates one million people are homeless; however, their number does not include tent cities with less than 500 residents.  This is not humane, safe or sustainable. 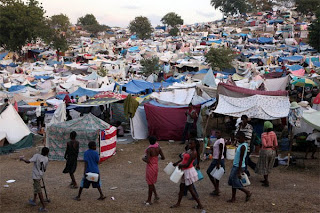 One of the core challenges for economic development in Haiti is the lack of access to credit to launch a business or rebuild a home.  The banks are controlled by a small business cartel, the Groupe de Bourdon, which rules the Haitian economy through government favor and monopolies.  If you are lucky enough to secure a loan (mostly through relationships), chances are the interests rate will be around 43%.  And, the most common way to secure that loan is by using your home as collateral.  With so many people homeless, economic activity cannot really resume until Haitians can begin rebuilding their homes.
The Haitian Housing Authority
One creative solution to this economic and recovery challenge is the creation of a Haitian Housing Authority.  The Authority would be dedicated to the stated goal of “Building Back Better”.  It would essentially operate as a public-private partnership between the international community and the Haitian Government to do two things:  1.  Award Haitians low interest (2-4%) loans to rebuild their homes; and 2. Regulate the rebuilding process by providing training and certification to contractors, developing building codes, and monitoring rebuilding compliance.
Click on picture to enlarge 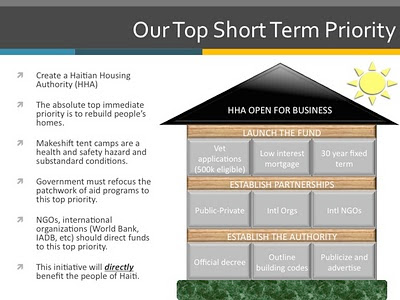 In the short term, the HHA could quickly solve the most pressing need for housing in Haiti.  Keith Miyamoto, a San Francisco-based earthquake reconstruction expert, says it would take about $200 million and six months to put one million people into earthquake resistant homes.  He has already trained a corps of local engineers to identify homes that can be rebuilt and how to build new homes.  In the long term, the HHA could help solve the access to credit challenges, break up a bank monopoly by forcing banks to compete, and contribute to the overall building codes.  The HHA would also aim to build a new economic development center by training new contractors and providing a new skill set to Haitians and getting Haitians back to work by constructing homes.
Funding and Establishment of the HHA
Funding this program should not require any new funding.  There is already plenty of aid money out there – about 80% of it has not even been spent yet.  The international NGOs that have received large donations and funds could be encouraged to allocate a portion of their funds to the new Authority.  Countries that have yet to remit their funds may be encouraged by such a straightforward and focused concept.
Setting up the authority should be a straightforward process, but will likely require the Haitian Government lead in order to get it moving.  Many aid organizations will be reluctant to part with funds unless they see a role for themselves and a real commitment by the Haitian Government to make it work.  The Haitian Government needs to make the priorities of the Haitian people their priority and show some leadership.  The establishment of a Haitian Housing Authority would do just that.  The government could launch the HHA by an official decree. The Haitian Government will need to work to secure international buy in and identify partners from the international community in order to capitalize the fund.  International organizations, such as the World Bank and IDB, as well as NGOs have vast amounts of reconstruction funds at their disposal.  The Red Cross alone has almost $200 million remaining from the $445 million that was donated to earthquake recovery. 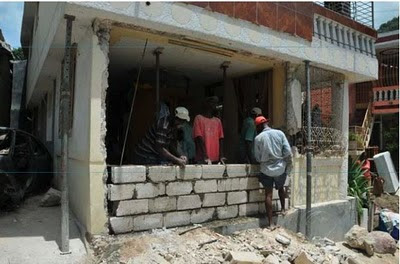 The international partners should play a key role in establishing and managing the HHA, but should focus on building capacity in Haiti by working closely with the Haitian Government to set up the mechanism for vetting, approving and administering loans.  Mechanisms to counter corruption and graft must be central to the process.  Loan recipients should be free to identify their own contractors, but the HHA should require that contractors be certified by the HHA and build according to newly defined building codes (Haiti currently has no such codes or inspectors).  It should be key to the plan to include Haitian contractors and provide technical training for the required certification as well as training for building inspectors.
Of course, priority access to the fund should be given to earthquake victims, but this project should also be sustainable.  Going forward, the fund could help Haitians make their existing homes and businesses earthquake proof.  This will help to spur a new local industry and build capacity in the Haitian construction sector.
Conclusion
Concentrating aid in a priority sector that directly benefits Haitians should be a priority.  It has been more than a year since the earthquake, and we have not even begun to move towards rebuilding.  This type of program would provide real benefits to Haitians and give them the tools to help themselves, which should ultimately have lasting impact on Haiti’s economy.
Posted by Haiti Sondage & Enquetes at 3:29 PM No comments: